With: The Saints (who opened for them on other dates of this tour) and Dorian Gray
Setlist
Ceremony, Ultraviolence, Chosen Time, Dreams Never End, We All Stand, Truth, Your Silent Face, Temptation, Denial, Blue Monday

I have a video of this, while my version appears to have been an optical transfer, and therefore nearly unwatchable, through the magic of the Internet, we now have a much better copy, see above.

Here's what GaoBest has to say about this one:

"I think 11-27-82 is from a close-circuit recording; the venue consisted of a bar room and a performance room, and used tripod cameras for a close-circuit feed into tv sets in the bar room. Excellent quality photography, but of course generation loss... but if you've been to the Shoreline, I'm sure you've been to the bar during music performance, or seen the "overscreen" TV screens, which show band footage scenes... just like that!"

His version is better, not being an optical transfer, though the color cuts in and out...it's seen one too many generations of copies. Writeup is based on his copy. Archived on a Umetic (PAL 625).

There are probably brief edits between all of the tracks.

Apparently this *wasn't* from closed-circuit TV but was filmed in the balcony. Reports are that an instrumental version of 'New Dawn Fades' was played at soundcheck. 'Temptation' and the very first part of 'Denial' are not the SBD source used on the video for the rest of this show but are taking from a different recording that doesn't appear to circulate.

There's an individual wearing a blue Duke t-shirt (Terry Mason) that is leaning back in a Christ-like post for much of the performance of this song.

All the band are facing in different directions. Bernard is wearing a sleeveless white shirt with a badge of an eagle on a shield, Gillian a knee-high print dress, Hooky in stark contrast to the singer/guitarist wearing a sleeveless black shirt, and Stephen a long-sleeved white collared shirt.

The intro to Ultraviolence gurgles until Gillian presses something. Intense, amazing.

lyric: "Down to the ground / In your shit-hole!"

Bernard switches his guitar before the start of this track. At the end, he goes over to the banks of keyboards and starts fiddling.

Starts with an off-focus closeup on Hooky.

Duke of Christ-pose is back.

New Order lose the plot somewhat near the end of this song. Apparently Barney has problems with his guitar, eyeing the bridge, which may have been the source of the problems.

Vocoder makes its appearance. Bernard sings the first line in a near-croon, but shifts to a more restrained vocal. Stephen steps away from the drumkit and goes behind the keyboard. Sound starts to cut out between first and second verses.

Second time this song is ever played live, the first being two nights before. Remarkably well-formed for such a virgin rendering, lyrics are complete including the classic 'why don't you piss off' bit. About the only thing different is the sound of the syndrum.

Temptation is cut from this recording (but restored on the full copy online), only the first couple of seconds survive on most copies. However, it was recorded, albeit with loads of distortion.

Newly-discovered footage has surfaced of this song, but with a worse-quality soundtrack.

User mondoprune has shared this, here:
The sound of Denial cuts out a couple of times.

Bernard sits down and sips at his beverage through the intro. Hooky is playing drums throughout. Not otherwise much different than the version we all know and love.

One minor difference is Bernard sings "How should I feel" instead of "How do I feel". And Gillian's keyboard playing is lovingly shaky here. At one point, Barney and Stephen start talking, in and of itself a fairly unusual occurence.

Handbill, screencap from the Temptation video above: 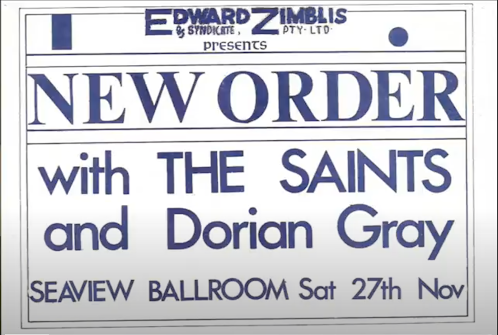