(video from stutterPT, digitized from booomboom's tape)
Setlist
The Him, Ceremony, Dreams Never End, Truth, ICB, Senses, Procession,
Denial, In A Lonely Place, Everything's Gone Green
(Playlist from Fractured/Image)
This performance exists in a number of formats.
One of the performances on the fabled 'Dreams Never End' 3xLP bootleg.
Includes the complete perfornamce.
Audio from New Order Anthology Volume 5, with "Senses" mislabelled
as "Chosen Time".
Also missing some tracks ("Truth", "IALP")
The rarest is a video, shot in near black-and-white with flickering
due to it being an early PAL to NTSC mastering job.  Definitely
not a pro shot, *way* too many shock jerk zoom in and outs.  Sound is
distorted in the bass rumble direction, and is in mono, and may have
been taken from a copy of a bootleg, as there is crackling, though the
sound seems not to have been re-EQ'ed, as it now appears to have been
in my copy of the 'Dreams Never End' bootleg.   Video quality is murky,
to say the least (on par with FACT37).  Bernard has a strange far away
stare, probably chemically induced.  More closeups of Steve Morris than
normally seen in these sorts of things.  This has since surfaced in much
better quality.
Video starts with Dreams Never End (the first two songs apparently
no having been filmed).  Gillian is initially barely present.
The Him
Would this be the first recorded instance of the "woo"?
The Him:  "Some days you waste your life away...whoo!"
Ceremony, Truth, and ICB follow, the latter featuring excellent
guitar interplay.  Volume suddenly rises for a second at the 4:47 point.
Tremendous bass feedback that starts between Senses and Procession...
it drowns out much of the latter song.
Intense version of Denial.  IALP has more bass rumbling, and an improv
sequence near the end.
Despite press propaganda, New Order did play encores in the early days.
The whistling and cheering is nearly deafening as the bad eventually make
it back on for Everything's Gone Green, and more headache-inducing
zooming.
Featured is Ian's Vox guitar, which Bernard plays on for the duration
of the song.  About midway during the song, there's an edit and the
camera angle changes.  Near the end of the song, Bernard appears to
be chatting to Gillian for a bit, then he straps his guitar and returns
to what he was doing.  Even with the edit, the song is nearly 9 minutes
long.
Some more information about the master, from "booomboom" in the
sharingthegroove.org forums:
Originally posted by snotters:
Fantastic! Can't wait - Roskilde 84 is a great gig too. Brilliant
versions of Sunrise and Perfect Kiss. But then most of the 84 gigs were
great (pre-Lowlife).
Booom, did you digitise Berlin 81 at all?
[His reply, unedited]:
No, and I have a little problem with that. The original was taped by a
Uher reel to reel, I have the reel to reel tape, but my reel to reel
machine ( I hope, that's the right word ) is not working fine in the
moment , when I put the cables to the output, I have a loud "Rattle &
Hum ". So I first have to fix my machine and after that I can work with
the reel to reel tapes, I think in a few weeks, but I promise you, I
will seed it. As you wrote, Roskilde `84 was a great gig with ( in my
opinion ) one of the best versions of Perfect Kiss and it's a
mastertape .too.Much better quality than the bootleg from Roskilde, but
when I seed the show I will write more about these things.thanks for all
your interest and great comments, booomboom
This master has finally seen the light of day, thanks to booomboom.
He also notes a bit that got left off of the LP boot:
"for the perfect history, you can hear me speaking before track 10,
I'm saying a bad german word (Arschloch) that means asshole to my
neighbour, because he is crying in my microphones. (this part is only
available at my mastertape, 2 seconds)
Location: Berlin, Germany 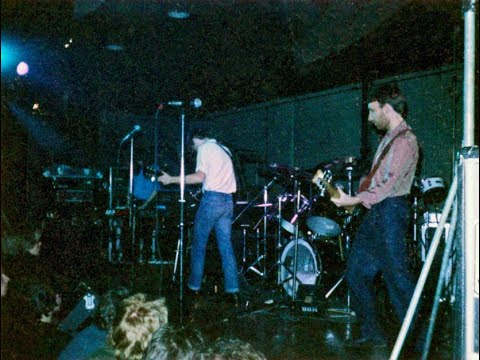