Setlist
In A Lonely Place, The Him, Mesh, Procession, Truth, Cries And Whispers, Dreams Never End, Ceremony, Senses
(playlist from Fractured/Image)
Thanks to benno for recording this show, and for allowing me to use the photos presented herein, which are also available here.
New Order's third gig as a four-piece.  The band seems to have a lot of monitor problems here, which makes for an unusually large number of speaking bits.
In A Lonely Place
BS:  "One, two.  No foldback."

BS:  "There's a section of foldback on this."

and right before the vocals...

BS:  "The guitar through the foldback."

(right after Hooky's done with singing)

PH:  "One two.  Turn the foldback on this, please. 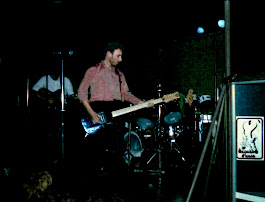 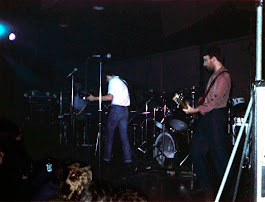 A few seconds later, a higher pitched voice is heard (from the same location in the stereo field Bernard was coming from) saying, "Hi hat."
BS:  "Turn the drum...back up."  Synths at this point are low in the mix but are turned up to dominate it.

Some tuning between this and the next song, Cries And Whispers.
BS:  "Sorry if you were expecting any...er.... Joy Division songs.  Not really.  We're not going to play any.

(thanks to benno who was there and recorded this show for posterity for clarifying the exact wording.  He goes on to add "Whether it was an affectation on Barney's part to maintain the aloof, couldn't care less about the fans attitude, or genuine anger (even if unacknowledged, or even denied) about the effect of Curtis's suicide on the fortunes of him and his band mates, Barney was being extremely harsh about audience members who may have been present because they had been, and still were, Joy Division fans. So this is what he actually said (I speak the language), and it was said with no hint of humour, or of empathy with the fans. He was just plain angry.") 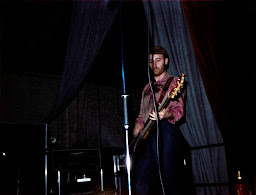 [Mark Johnson gives 'really' instead of 'not really', and 'We're not going to be playing any.']

BS:  "Any requests?  [silence]  I bet you don't fucking know one!"
Benno: "And that last comment was really spiteful, because there was (almost) nobody in the audience who would have even recognised 'In A Lonely Place' or 'Ceremony' as Joy Division songs. I acknowledge that he and Hooky and Stephen had been badly affected by the death of Ian Curtis, but they were just typical young blokes who pretended not to give a toss, and it wasn't the fault of the audience that their lives had taken the path they had."

Dreams Never End,  Ceremony, and  Senses conclude the set.
There are couple minutes of footage of Ceremony (filmed by Tony Wilson), where Terry Mason can be seen disposing of a punter who has climbed onto the stage, along with a part of Mesh, which for the first time, can be viewed below.
Location: Rochdale, UK